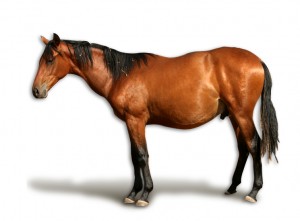 Obesity in horses used to be virtually non-existent.  The majority of horses were kept as beasts of burden, only the rich possessing them as companion animals.  Working horses couldn’t possibly consume more calories than they burned while pulling timber and cargo, transporting people, plowing fields, or driving livestock.  Plump horses were suspected of lameness or inaptitude and were discredited at auctions.  With the availability of calorie-dense processed feeds and people’s incomes justifying keeping horses for little more than the occasional weekend leisurely ride, more horses these days are carrying more fat than freight and more bulk than burden.  As a result, more horses are seen with disorders and afflictions thought to be linked to obesity.

One such disease has had many aliases over the years.  Once termed obesity-related laminitis, peripheral or pseudo- Cushing’s disease, hypothyroid laminitis, insulin resistance syndrome, and even syndrome-X, this devastating illness is now known as equine metabolic syndrome (EMS).  Horses with EMS generally present with one or more of the following symptoms:

The primary disease mechanism responsible for symptoms in EMS is insulin resistance.  When food is consumed, it is eventually broken down into glucose, a very basic sugar molecule that is the primary source of energy for every cell in the body.  As glucose is absorbed through the gastrointestinal tract into the bloodstream, an organ called the pancreas is stimulated to produce the hormone insulin.  Insulin is responsible for carrying glucose into the cells; without it, the cells will become starved for fuel and cease to function properly, regardless of the abundant supply of glucose circulating in the bloodstream.  Insulin resistance describes an interruption in this energy transfer into cells.  There may be enough insulin released by the pancreas, but for some reason the body’s tissues do not recognize its purpose.

Obesity may be a factor in the over-production of another hormone called cortisol.  Cortisol is normally released by the adrenal gland in times of stress in order to suppress the activity of insulin.  This causes an elevation of blood-glucose levels to be used as energy reserves in fight-or-flight situations.  In Cushing’s disease, cortisol is overly secreted by the adrenal gland; in EMS however, the adrenal gland functions normally, and excess cortisol appears to instead originate in adipose tissues, or fat deposits.

Not every overweight horse will develop EMS, but obesity is certainly a risk factor.  To diagnose metabolic syndrome, the veterinarian will rely on the animal’s history of symptoms, body condition, and the results of glucose tolerance testing.  Most horses that have developed the syndrome are middle-aged, over seven and under 18 years of age.  Certain breeds are predisposed to EMS, and this will be taken into account.  Ponies, Morgans, European Warmbloods, Spanish Mustangs, Peruvian Pasos, and Paso Finos are over represented with EMS.  Also, broodmares that have difficulty becoming pregnant may be suspected.

Though “gluttony” may have played a role at some point, veterinarians observe that some horses with signs of EMS are not apparently being overfed.  Their owners describe them as “easy-keepers”, unable to lose weight despite being restricted from calorie-rich processed feeds.  This causes further speculation about a genetic propensity to the illness.

Glucose tolerance testing involves taking several blood samples from the horse to measure serum-glucose and insulin levels before and after a bolus of glucose is administered.  These results are compared to expected results from a healthy animal to determine whether the horse appears to have developed insulin resistance.  Horses are usually fasted for a period of time before the test is performed.

There is no approved medical treatment for equine metabolic syndrome.  Drugs administered to horses with Cushing’s disease are likely to exacerbate EMS.  Instead, dietary management along with appropriate exercise is the best way to increase insulin activity and reduce the occurrence and severity of symptoms.  (These are also the best methods by which to reduce the possibility of developing EMS.)

Horses should be fed just enough to maintain a good body condition.  Some owners, in an effort to have an impressively large and imposing animal, confuse body weight with lean muscle mass.  A horse’s ribs should always be easily palpable, but not protruding visibly.  Horses that are not used for laborious chores will require little feed supplementation beyond access to a good pasture.  Processed grains are especially high in carbohydrates (sugars) and should be a minimal portion of the diet.  EMS horses should be restricted from grain and grain mixtures altogether.  A proper weight-loss regimen should be developed through the advice of a veterinarian in order to see progressive benefits without causing starvation.

Exercise is the only way to burn calories ingested and stored as fat.  Regular exercise not only helps to shed excess pounds, but also encourages better insulin activity.  A veterinarian can help determine a safe and appropriate level of activity for an already obese animal.  Obviously, any existing lameness and / or laminitis will need to be addressed with the help of the vet and farrier before the horse will be ready to run.

At best, equine metabolic syndrome can be reversed entirely if bad habits are stopped before serious symptoms develop.  The further obese and symptomatic the horse becomes however, the more difficult it will be to slow the progression of the disease.