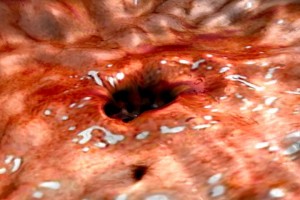 Gastric ulcers are erosions in the protective lining of the stomach.  The lining is a mucosal barrier that keeps the stomach’s acids and enzymes from digesting its own tissue.  Several factors contribute to the development of ulcers in horses.  They include any stressful event(s): extended confinement, sporadic feeding cycles, long travel, and extreme exercise.  Also, certain concentrated diets may accelerate ulcer formation.  The prevalence of gastric ulcers in horses is surprising high with as many as half of all foals, and a third of all adults, possessing mild erosions.  In dressage and race horses, the majority of animals are affected and the lesions tend to be more severe.  Ulcerative disease is sometimes referred to as Equine Gastric Ulcer Syndrome (EGUS).

When allowed to do so, horses graze continually throughout the day.  Unlike ruminant animals, their stomachs are relatively small and are not used to store large amounts of food.  By design, the horse’s stomach continually produces acid to digest the constant supply of food.  Confinement practices may lead to a build up of acid that begins to erode the protective mucosal layer.

The type of food a horse eats also plays a role in EGUS.  Concentrated feed contains less roughage which requires chewing.  Chewing stimulates saliva production which neutralizes stomach acids to some degree.  Also, concentrated feed may not contain as much calcium as is found in alfalfa hay.  Calcium may neutralize acid and helps protect the stomach wall.

Highly exercised horses suffer from gastric ulceration due to all of these factors combined.  In addition, stress from training and competition causes increased levels of certain hormones that weaken the stomach’s ability to inhibit erosion.  Stress slows gastric emptying, giving the stomach acids more contact time with the mucosal layer.

Non-steroidal anti-inflammatory drugs (NSAIDs) and Glucocorticoids (i.e.: prednisone) can also accelerate ulcer formation when used at high doses or for extended periods of time.  These drugs are especially likely to lead to ulcer formation if used in combination.

Foals that have advanced gastric ulceration will show signs of colic especially after nursing and eating.  They may nurse reluctantly and stop eating.  A symptom called bruxism, or clenching and grinding of the teeth, along with drooling is also sometimes noted in foals.  They may develop diarrhea, fail to thrive, and lose weight.

Adult horses will show a poor body condition and poor coat quality.  They will have a reduced appetite and a depressed attitude.  Symptoms of mild colic include lying down frequently and rolling.  Dressage and race horses will decline to perform.  Weight loss is eventually seen as the ulceration becomes more prolific.  In the worst cases, gastric ulcers may become life-threatening.

Changing horse management practices is absolutely necessary to treat and prevent the recurrence of gastric ulceration.  In addition, the veterinarian may prescribe several medications that help reduce acid production, bind with or block the action of stomach acid, and protect the eroded areas in the stomach lining while they heal.  These drugs include:

Antacids (pH buffers) – require very large doses and have limited duration of effect.  Still, may be used to provide immediate relief from pain.

Protectants – form a protective coating over the eroded portion of the stomach lining protecting the ulcer from contact with stomach acid.

Probiotics – supplements of beneficial bacteria that help reestablish the normal gut flora and have been shown to produce anti-inflammatory effects on the GI tract.

Prevention requires the animal to live a more natural lifestyle.  Reducing confinement time, allowing more grazing, decreasing concentrated feeds, and feeding high quality hay will all help to prevent ulcer formation.  For very mild signs of EGUS, these changes in routine may be all that is necessary.