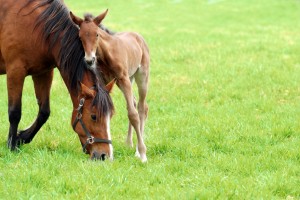 Foaling is the process of giving birth to a baby horse.  The broodmare carries the foal for about 11 months from conception (fertilization) to delivery.  This time period is referred to as the gestation period and can range from 320 to 365 days depending upon breed, variation within a breed and season of the year.  While wild equines have successfully handled the entire process of breeding on their own un-aided for eons, domestic horse owners can take steps to ensure that a healthy foal is delivered and there is no danger to the mare should something go wrong.

Mares should be dewormed and vaccinated prior to and during the gestation period.  The veterinarian should be consulted as to which diseases are threats in their geographic location.  Deworming ensures that no parasites are passed from the mare to the foal shortly after birth, and vaccinating causes the mare to pass antibodies that fight diseases to her foal in the colostrum, or “first milk”.  The vaccines and dewormer need to be safe for the mare if given during pregnancy.

Sometimes mares leak the colostrum before giving birth.  This is a concern, because the foal may not receive the benefit of antibody protection.  Some slight leakage is considered normal a few days before foaling, but if colostrum is flowing, it should be collected in a sterile container and frozen, to be given by bottle to the foal four to six hours after birth.  If this is not possible, the foal may receive killed vaccines sooner that normally scheduled (they are pointless or possibly harmful given early to a foal that has received colostrum from a vaccinated mare).  In addition, foals can be given plasma IV by a veterinarian to increase its immune function.

A mare can foal at pasture, but observing her for problems is a challenge.

A clean quiet stall should be prepared for the foaling mare as far from other animals as possible to avoid stress and a source of infection.  All bedding should be removed, the floors and walls de-soiled, and every surface disinfected.  After the stall is completely dry, fresh bedding straw is brought in – enough to provide warmth, but not so much as to impede the little horse from learning to stand.  The stall should be warm and well ventilated.  Bedding should be changed daily until the foal arrives.

About one month to two weeks prior to giving birth, the mare will show signs that the birthday is near.  These will include the vulva dropping, the udder filling, and milk veins becoming prominent.  Clear to milky fluid (waxing) may leak from the teats for several days before parturition (delivery).

Foaling occurs in three stages. The first stage lasts from 1 to 2 hours typically (up to 24 hours), and begins as uterine contractions start to push the fetus toward and into the birth canal.  The mare may be anxious.  She may lie down and rise often, pace, sweat, and urinate repeatedly.  During this stage the foal is turning into position for delivery, and this movement may be noticed in the mare’s abdomen.

The second stage is marked by the water breaking.  The sac that surrounds the fetus ruptures, and amniotic fluid pours from the vulva.  This stage includes the delivery of the foal and may take a few minutes to half an hour.  The mare may repeatedly reposition herself in the stall.  It is very important to not disturb the mare during this process.  If she is stressed or distracted, it may delay or stop the contractions.  If full delivery does not occur within 30 minutes, the foal may be malpositioned. Foals are born front feet first, soles pointed downward; head next, nose forward; then the shoulders, and so on.  If the foal is turned otherwise, the veterinarian will need to assist.  Malposition may appear as only one forelimb showing, more than two limbs visible, the nose is not between the fore limbs (head turned backward), nose appears before the forelimbs, or the soles are upside down.  In addition to malpositioned foal, if a red bag is seen and you cannot see the foals legs, blunt transection (opening) of the bag may need to be made.  A veterinarian should be called immediately in any of these situations.

Very occasionally, the foal will pass without the amniotic sac breaking.  If this is the case, the mare may groom the foal to open the sac, or she may need assistance.  It should be opened immediately.  Do not use a sharp implement; it will tear fairly easily by hand.  The foal will need the mouth and nose cleaned with a towel and fluid removed from its lungs by rubbing the thorax vigorously to stimulate breathing.  The less responsive the foal is, the more stimulation it needs.  Leave the sac attached to the umbilical cord until there are no pulses seen in the cord (20 minutes).  Then, cut the cord about 3 to 4 inches from the foal’s body and wipe the stump with dilute betadine solution.

The third stage is the passing of the afterbirth, or the placenta, and this can take a few minutes to several hours.  It may be necessary to tie the placenta in knots to shorten its length so the mare does not step on it.  If she pulls it out prematurely, there can be damage to the uterus.  If the afterbirth is not completely delivered in 3 hours, contact the veterinarian.  A retained placenta can lead to life-threatening infections.

After delivery, the mare may seem colicky.  This is normal as the uterus is contracting back to its normal size.

Right after birth, the mare should begin cleaning the foal aggressively.  Despite her concerns, the foal will be anxiously trying to stand.  A foal that cannot stand after 4 or 5 hours may need veterinary attention.  The foal should also begin to nurse within the first 6 hours of life in order to receive the benefit of colostrum.