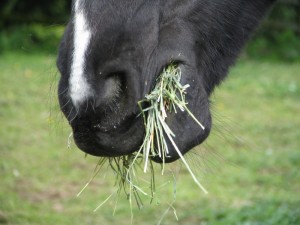 Botulism is widely known as a severe form of food poisoning in people, but horses, especially foals, are also susceptible. The disease is caused by the effects of toxins produced by several strains of bacteria in the genus Clostridium.  Specifically, C. botulinum is responsible for the neurotoxins that result in generalized weakness, flaccid paralysis of the tongue, difficulty swallowing, and eventually respiratory failure.  Another species of Clostridium, C. tetani, causes Tetanus in horses and other mammals; however the classical symptoms and the routes of entry of the two diseases are easy to differentiate.  Botulism most often occurs after the ingestion of contaminated feed, whereas Tetanus is a secondary complication of infected wounds.  In foals, Botulism is the cause of “Shaker Foal Syndrome”, which likely proves fatal if not treated aggressively.

How does a horse get exposed to Botulism?

A horse’s feed and water may become contaminated by Botulinum toxin in several ways. Rodents, snakes, or other small animals carrying the bacteria may become trapped during harvesting and baling methods, or may drown in a horse’s water supply.  As oxygen is depleted in the decaying animal’s body, C. botulinum will begin rapidly forming toxin-releasing spores.  The spores form only under anaerobic conditions such as this, where there is little to no oxygen in the bacteria’s environment.  As the small animal decomposes, the powerful botulinum toxins are released and contaminate the surrounding feed and water.  Any horse that ingests enough of the toxin will succumb to its devastating effects.

Fermented forage feeds (haylage) may also become contaminated with C. botulinum by the same process. The conditions inside a sealed bag of haylage, with high moisture content and low oxygen levels, are ideal for Clostridium to sporulate unless the fermentation process maintains a very acid pH (< 4.5) throughout the bale.  It may not be possible to detect a “spoiled” bag of haylage by sight and smell alone.  One may find as many endorsements as there are precautions about feeding haylage to horses.  For horses that may benefit from haylage supplementation, such as those requiring ultra low-dust feeds, contract a reputable source for the bales and consult your veterinarian as to whether the benefit outweighs the risk of Botulism contamination.

Foals may be exposed to botulinum toxin through contaminated feeds or from the environment. Because very young foals have underdeveloped immune systems, it may be possible (although rare) for a foal to develop Botulism by ingesting the bacteria alone – from soil or contaminated manure, etc.  On the other hand, it would be very unlikely for an adult horse to be made ill by these otherwise harmful bacteria which may normally reside in very small populations within the GI tract.  The normal bacterial flora in the healthy adult horse naturally inhibits C. botulinum sporulation.

Occasionally, Botulism may occur from infection of a wound with C. botulinum. This is more commonly the route by which Tetanus affects the horse, however.

What are the symptoms of Botulism?

In foals and adult horses, as well as humans, botulinum toxin causes profound neurological deficits. It interferes with the transmission of normal electro-chemical signals between targeted motoneurons and muscle tissue, resulting in the inability of certain muscles to contract.  Generalized weakness and depression is soon followed by flaccid paralysis of the upper and lower GI tract and eventually the muscles that control respiration.  (In contrast, Tetanus causes rigid paralysis, where the muscles fail to relax.)  The tongue may hang from the side of the mouth, the nursing foal will drool milk, the eyelids will sag, and there will be difficulty swallowing food and water.  The tail will also begin to fall, and the superficial muscles of the horse will fasciculate, or tremble.  This appearance is what lends the name “Shaker Foal Syndrome”.

As the disease progresses, the horse will become unable to rise or remain standing.  Internally, the digestive tract loses its normal contractions, called peristalsis, and constipation occurs – although rarely noted as an observed symptom.  At complete ileus (intestinal paralysis), watery diarrhea may occur.

Ultimately, the neurotoxin inhibits the muscles that control breathing.  Death occurs as a consequence of suffocation, dehydration, or secondary complications from the horse being down.

The cascade of symptoms can begin within a matter of hours after ingestion of a significant amount of botulinum toxin or may take days to become evident, depending upon the exposure.  When adult horses, or especially multiple horses in a group, become symptomatic, contaminated feed or water should be suspected as the primary source of toxin.

What is the treatment for Botulism and how can we prevent the disease?

In order for treatment to be effective, the exposure to botulinum toxin must be recognized early.  Plasma transfusions containing antitoxin are administered intravenously in addition to penicillin.  The plasma antitoxin will block any free botulinum toxin in the bloodstream from binding with healthy motoneurons, while the penicillin will help to kill any toxin-producing bacteria in the GI tract or other tissues.  There is no treatment available to reverse the damage that has already occurred to affected nerve cells; instead, the horse’s body will require several days to weeks to rebuild new neuromuscular junctions and regain normal use of the dysfunctional muscles.

Supportive treatment, once the horse is unable to eat, drink, and rise on its own –  and especially if respiratory paralysis has occurred – is extremely difficult and costly.  Pressure sores, colic, and secondary infections can be as challenging to address as the primary illness itself.

Obviously, it is better to prevent exposure to Botulism in the first place.  Harvesting and baling methods must assure that moisture is kept to a minimum.  Never feed hay that contains decayed, discolored, moldy, or off-smelling content.  Round bales can be especially difficult to assess for quality until the bales are opened.  Consult a veterinarian for recommendations before feeding haylage, since it is especially susceptible to contamination.

Fortunately, approved vaccines are available to prevent Botulism in foals, broodmares, and other adult horses.  Mares should be vaccinated before foaling, and vaccination is suitable for foals as early as two weeks of age in high risk situations.  Other adults are typically boostered yearly.  Your veterinarian will advise you on an appropriate vaccination schedule for your horses’ particular exposure risk.