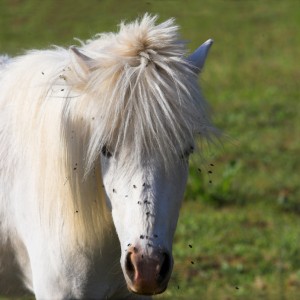 There are so many “bugs” that parasitize the skin of horses, it’s difficult to name them all in one attempt; however, they can be categorized into several different groups including: biting flies, non-biting flies, mosquitoes, mites, lice, and ticks.  All are very common, and all cause disease to a varying degree.  Populations of flies and mosquitoes fluctuate according to season; but mites, lice, and ticks stay with their hosts once they have established a “home”.  Parasite species also vary according to geographic location.  It is important to become familiar with the characteristics of each so that a prevention strategy can be established.

All are blood-suckers that in large numbers can lead to significant anemia (blood-loss).  All biting flies leave the skin susceptible to secondary bacterial infections.

Horse flies, deer flies, and stable flies inflict very painful bites, and may cause panic in horses.  They are often interrupted in their feeding attempts, causing them to move from horse to horse, and making them suitable vectors for diseases like equine infectious anemia and anthrax.  All three flies reproduce in high moisture areas, around tanks and in moist rotting vegetation.  Larvae burrow beneath the soil and pupate (form hard, chemical resistant shells) before emerging as adults, making them difficult to kill with insecticide.  Topical repellants are utilized to give temporary relief from bites and prevent disease transmission to horses.  Providing drainage to low lying areas and clearing plant debris may help to reduce populations.

Black flies are known to cause death by overwhelming their victims in such large numbers as to cause weakness, toxemia, and anaphylactic shock.  They prefer the mucous membranes of the animal for feeding and are seen around the eyes, ears, nares, mouth, anus, and genitals.  They are most common around moving waters.

Horn flies reproduce only in cattle manure, but will migrate to nearby horse populations.  They are capable of causing anemia in very large numbers, but are associated more with skin lesions and secondary infections as a consequence.  Topical insecticides and repellants are used to control Horn flies.

Sand flies and biting midges are common in wet, swampy areas.  They are so small that they may go unnoticed (also called no-see-ums in some parts of the country). Horses kept near these breeding grounds are susceptible to skin lesions called Sweet Itch.  Some horses rub and bite incessantly as a result of the allergic reaction caused by the bites of these flies, while others do not react significantly.  Repellants are the only control measure in lieu of moving the horses away from infested areas.

Though not blood-suckers, the flies of this group cause disease in horses in a different, but still significant manner.

Botflies are probably the most significant threat in this group, but they parasitize horses internally by laying the eggs on the horse’s coat.  The eggs enter the animal’s mouth and hatch into infective larvae when the horse grooms itself.  See Intestinal Parasites of Horses for more information and control measures for this species.

House flies breed prolifically in manure, farm and household waste, and rotting plant material.  They feed on organic debris and mucous around every opening on the horse.  While they don’t bite the horse, the huge numbers of flies can be so annoying to the animal to cause it to stop eating and lose weight.  House flies carry hundreds of bacteria and viruses and are significant vectors of infections.  Control is an ongoing battle in sanitation, insecticide / larvicide application, topical repellants, and fly baits.

Blow flies that parasitize horses are also called screwworm flies.  Flies lay their eggs which hatch into larvae (maggots called screwworms) in necrotic flesh and decaying organic material.  Screwworms feed on the necrotic material within a wound on the animal, but unlike other maggots, do not stop there.  They move onto healthy tissue, burrowing deeper anytime the wound is disturbed.  The “blow fly eradication program” officially ended the threat of screwworms in the United States, but with reproducing flies just over the border in Mexico and parts of Central America, it is possible that they make a reappearance.  The parasite is a reportable species in the United States, meaning they must be brought to the attention of the State Veterinarian if sighted.

Mosquitoes require relatively stagnant or slow moving water on which to deposit their eggs.  Larvae develop under the water’s surface, pupate, and emerge as flying insects.  Only the females are blood suckers, which must do so in order to reproduce.  Female mosquitoes can transmit encephalomyelitis (West Nile Virus, EEE, WEE, and VEE) and possibly other diseases known to be transmitted by biting flies.  Usually, their numbers aren’t so great as to cause significant blood loss, but it is certainly possible.  Breeding areas, which can be as seemingly insignificant as an abandoned soda can, can produce thousands of mosquitoes in a matter of days after a rain shower.  Drainage of stagnant reservoirs is the best method to prevent an infestation.  Mosquito “dunks” can be tossed into tanks and troughs and are safe for fish, invertebrates, and all animals that drink from the body of water.  They contain a dormant stage of a bacterium called Bacillus thuringiensis that parasitizes and kills mosquito larvae.  Topical repellants can be applied to horses to provide temporary protection.

All mites are microscopic.  Sarcoptic, Psoroptic, and Demodectic Mange (mites specific to horses) are all rare to very rare in the United States.  In addition, Sarcoptic and Psoroptic mites are reportable to the State Veterinarian if found on a horse.

Chorioptic Mange mites feed on the surface tissues of the skin causing considerable irritation.  They are common on the legs of heavy draft breeds of horses and are spread by direct contact.  The mites cause intensely itchy papules to form, followed by hair loss.  The skin will become thickened, crusty, and oozing.  Infected horses may bite and chew at the limbs to the point of mutilation.  Secondary bacterial infection is very common.  The mites have an unusual life-cycle in that they become most infective during the cooler months of the year.  Lesions may improve during the summer, and return in the winter.  There is no approved (labeled) product for the treatment of Chorioptic Mange in horses, but many veterinarians treat the legs topically with ivermectin mixed into antibiotic / anti-inflammatory paste, or with fipronil (Frontline spray),a product labeled for fleas and ticks on dogs.  Horses with long hair should be clipped before topical treatment is applied.  Both treatments are found to be effective.

Chiggers are not specific parasites of horses, but they may opportunistically infest a horse if their numbers become great within a pasture.  They feed on the surface of the skin in the same manner as Chorioptic Mange mites, and cause itchy papules to form.  Unlike Chorioptic Mange mites, chiggers do not remain on the animal, so treatment to kill the mites on the horse is not necessary.  Horses are usually administered glucocorticoids (cortisone) to reduce itching and skin inflammation.  Topical repellants can be used to temporarily protect the horse from infestation.

Straw Itch mites live within straw and grain and occasionally infect a horse if their numbers become great (unchanged bedding straw).  Lesions may or may not be itchy and appear on the legs, muzzle, face, and neck. No treatment specifically to kill the mites on the horse is necessary.  The source of the mites should be removed, and the itch can be controlled with steroids.

Lice are small but visible to the naked eye.  They are species-specific, meaning the horse louse only infects horses.  Lice are contagious by direct contact between animals and by contact with contaminated fomites (brushes, tack, etc.).  They do not survive off of the host for more than a few days.  Both kinds of lice are more prevalent in winter months when hair coats are longer and horses are more stressed.  Biting lice may cause more symptoms of itchiness, while sucking lice in great numbers may cause anemia.  Severe lice infestations on foals can cause stunted growth.  There are numerous products available to kill lice, and they are easily controlled.  All exposed equipment, tack, and grooming supplies should be disinfected before reuse.

Numerous species according to geographical location

Ticks are visible to the naked eye, ranging in size from that of a pin head to the end of one’s pinky finger.  They are blood-suckers that can transmit diseases and cause anemia in large numbers.  Male ticks are tear drop shaped, grey, red, brown, and / or patterned with symmetrical markings.  Female ticks are usually seen fully engorged with blood and eggs, and appear like fat grey beans, their legs barely visible.   Ticks have 6 to 8 legs depending upon their stage of development, and pincer-like mouth parts that tightly grasp the host while they feed and reproduce.  Often, the smaller male tick will be found attached to the horse’s skin directly beneath the engorged female.  Females drop off of the host to lay their eggs which hatch into larvae (seed ticks) that climb up the nearest vertical surface.  They hang hook-like legs out into the wind to catch a ride on the next passer-by.

Ticks cause swelling at the attachment site, blood-loss in large numbers, and are capable transmitting several diseases including Piroplasmosis (Horse Tick Fever), Anaplasmosis (was Ehrlichiosis), Lyme Disease, and Tularemia.  Spinose ear ticks can cause severe damage to the inner and middle ear canal.

Killing ticks on the animal can be achieved by the use of numerous sprays or dips labeled for use on horses.  Environmental control is also very important as well, since ticks can survive off of the host for a long period of time without a blood meal.  Vertical surfaces of fences, trees, shrubs, buildings, etc. must be thoroughly treated.