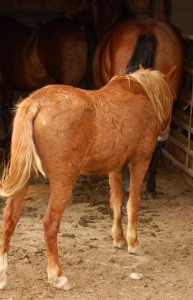 Cushing’s Disease (Pituitary Pars Intermediate Dysfunction; PPID) is an endocrine hormonal imbalance caused dysfunction of the pituitary gland.  The dysfunction overproduces several hormones that are responsible for critical functions throughout the body.  One of which is ACTH.  ACTH in turn stimulates the adrenal glands to produce cortisol, a hormone that is released when the body is stressed.  Cortisol conserves energy by inhibiting glucose uptake and temporarily suppressing the immune system.  It is important in survival, but at constantly high levels Cortisol has devastating consequences on the health of the horse.

Cushing’s affects primarily older horses.  There is no apparent breed or sex predilection for the disease.  There are numerous symptoms associated with Cushing’s, the most obvious of which is hirsutism, or abnormal hair growth.  Affected horses will become shaggy as a result of hormonal imbalance.  Other notable symptoms include:

Cushing’s develops over a period of time, so these symptoms may be overlooked as they gradually increase in intensity.  Before and after “snapshots” of the animal show obvious changes, but it may be difficult for an owner to become aware of the disease until symptoms are pronounced and the horse is obviously ailing.

Horses showing signs of Cushing’s Disease should be examined by a veterinarian who will perform a complete physical examination, take a detailed history of symptoms, and collect samples for laboratory analysis.  There is unfortunately no one definitive test for the disease.  Biopsy of the pituitary is impractical and dangerous because of its location at the base of the brain.  A combination of blood and urine tests are run instead, sometimes repeatedly to help confirm the disease.  Not all are necessarily performed, but the tests may include:

It is not recommended to treat horses based upon a presumptive diagnosis alone.  There is no approved (labeled) treatment for Cushing’s Disease, but an off-label use of pergolide mesylate can help reduce circulating ACTH levels and control some symptoms.  ACTH levels may be checked until a proper dosage is found.  Over-dosage causes anorexia and depression, and this drug must be administered with great care.  Because of the instability of Pergolide, environmental storage should be of a concern and discussed with the veterinarian.

Adjunct management of horses with Cushing’s includes grooming (body-clipping) the coat, frequent hoof assessment and proper farriery, maintaining vaccine status, frequent deworming, and feeding a low-grain diet.  The horse is more susceptible to external parasites and subsequent bacterial infection of the skin, so proper prevention steps should be established.

Even though there is no cure for Cushing’s Disease in horses, they can still live a comfortable life if managed properly.  The disease itself causes no pain or discomfort.  If laminitis cannot be controlled and lameness becomes chronic, humane euthanasia should be considered.