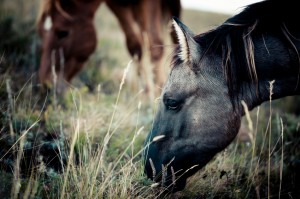 Anthrax is a very serious, often lethal, reportable disease that is caused by toxins produced by bacteria called Bacillus anthracis.  In most livestock, mass die-off may be the first indicator that anthrax has infected the herd; horses have a slight resistance to the effects of the toxins, so a sick horse may be seen before the disease causes death.  Anthrax is deployable as a military weapon against people and livestock, so the disease must be reported to a veterinarian if it is suspected.  Bacillus anthracis can form spores that lie dormant in soil for years, so sporadic natural infections are known to occur in several parts of the country.

Anthrax naturally spreads by accidental inhalation or ingestion of the dormant spores from soil contaminated by the carcass of an animal that succumbed to the disease.  Bison bones have been shown to harbor viable spores for at least 100 years.  Anthrax spores may be distributed over a wide area after flooding.  Once the spores enter the horse, they are reactivated and become the vegetative form of the bacteria.  They multiply rapidly within the bloodstream and produce toxins that are responsible for disease.  Biting flies are another possible vector of anthrax, carrying spores or vegetative bacteria from one animal to another during interrupted feeding.

Anthrax develops rapidly, causing fever as high as 1070F, followed by death.  Horses may have swelling in the underside of the barrel, decline food, and seem very depressed and lethargic.  Horses found already deceased will lack rigor mortis and have black blood seeping from the mouth, nose, and anus.  A horse carcass will be a reservoir of bacteria that can infect other animals and humans, so careful precautions must be taken if a horse is discovered with these signs.  The veterinarian should be immediately notified so that anthrax can be verified in the lab.

Surviving horses in the herd and on adjacent farms (as well as other livestock) should be vaccinated at once if a positive animal is detected.  All horses that have normal temperatures may receive the vaccine with the exception of pregnant mares, and any horse showing a fever will be treated with antibiotics.  The earlier an animal is treated, the more likely it is to survive.

Because anthrax persists in the environment, the veterinarian and health department will be consulted for safe disposal of the carcass and site disinfection.  Disturbing or transporting the carcass before a diagnosis is known may make complete disinfection impossible.

If anthrax is ever suspected, these steps should be taken to minimize exposure to people and other animals: