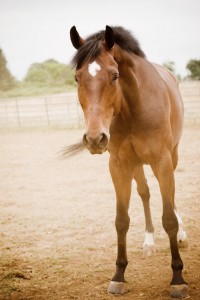 “Heaves” is the common name historically given for chronic obstructive pulmonary disease in horses.  It is characterized by lethargy and exercise intolerance, coughing and gagging, blood-tinged mucoid discharge from the nostrils, and abnormal respiratory sounds (wheezing or heaving).  The disease is probably better described as RAO, or recurrent airway obstruction, because the symptoms usually come and go over time.  It is similar to asthma in people, in that inhaled irritants and coincidental respiratory infections are significantly responsible for the onset and flare-ups of this disease.

The symptoms associated with RAO are caused by inflammation and narrowing of the bronchioles, or the air passages within the lungs.  Excessive mucous production further obstructs the airways.  Bronchospasm, constriction of the muscles that support the lung structures, reduces the horse’s ability to expel air effectively, causing the animal to use its abdominal muscles to force air out of the lungs during exhalation.   This repetition over time causes the overdevelopment of specific abdominal muscles, resulting in a classical “heave line” that projects from the bottom sides of the ribcage into the flanks, despite overall muscle atrophy (wasting) from exercise intolerance.

RAO generally affects horses 6 years of age and older that have developed an immuno-hypersensitivity from repeated exposure to allergens and inhaled particulate irritants.  Hay and bedding are common sources of dust and mold.  Mold spores, toxins produced by mold, and other organic allergens are believed to be responsible for the development and recurrent episodes of this disease.  Stable-kept horses and horses eating from a round bale of hay are most prone to RAO, but some genetic predisposition appears to be involved in an animal’s susceptibility.  A diagnosis almost always corresponds to a large amount of the horse’s life being stabled and fed poor quality hay.

Horses fed hay in the pasture or stable may develop symptoms of airway obstruction and respiratory distress within 90 minutes to several hours after exposure to dusts and molds.  The lung tissues become thickened, airways constrict, inflammatory mucous forms, and smooth muscle contractility in the lungs decreases.  This leads to reduced blood-oxygen saturation, lethargy, and weakness.  The affected animal will begin to cough and wheeze in an effort to ventilate the lungs and expel the accumulating mucous.  Copious amounts of nasal discharge are seen especially when the horse’s head is lowered after being tethered for several hours.  Blood may be seen in the exudates if coughing is especially forceful.

In RAO, the ability to exhale air from the lungs is compromised, while the ability to inflate the lungs remains fairly normal.  This causes emphysema, or pressure damage to the alveoli (tiny air sacs in the lungs) that is reversible in quickly treated horses, but may lead to permanent lung damage in chronic or poorly managed cases.  Persistent failure to respond to treatment is a sign that permanent damage has developed, and lung biopsies can confirm this, but it is difficult to determine when it may occur.

In addition to fatigue and exercise intolerance, chronic obstructive pulmonary disease will lead to appetite loss due to respiratory distress (i.e.: a feeling of suffocation while eating) and a decrease in the sense of smell and taste from mucous accumulation in the sinuses.  The horse will lose muscle mass rapidly after the body’s fat stores are depleted.

A diagnosis is often made presumptively, based upon clinical signs and the horse’s history (age, stabling history, exposure to respiratory irritants such as hay dust).  A bronchoalveolar lavage (BAL) performed by the veterinarian, where a sterile fluid is introduced by endoscopy into the lungs and collected for laboratory analysis, is useful to determine the level of inflammatory response.  This test may be used to help rule out other disease processes causing similar symptoms.  Chest x-rays, blood cell counts, and blood chemistry profiles may also be assessed as part of a diagnostic work-up.

Treatment for acute episodes of RAO includes first removing the source of the respiratory irritants.  This will also be vital in the long-term management of the disease, since once-affected horses will be very prone to recurrences.  If possible, the horse is moved to pasture to reduce exposure to dust, while stables are cleaned thoroughly and ventilation is improved to remove airborne contaminates.  Horses in respiratory distress are treated with anti-inflammatory drugs and bronchodilators to reduce swelling in the lung tissues and aid respiratory function.  Corticosteroids like dexamethasone and aerosolized fluticasone are preferred to non-steroidal anti-inflammatory drugs because of their broader spectrum of benefit despite potential side-effects associated with long-term administration.  Corticosteroids reduce tissue edema, open airways to some degree, and also increase appetite.  The dosage is then tapered to establish the minimum effective dose while the horse recovers.

Management of RAO requires diligence.  Every effort to reduce the horse’s exposure to dust and molds should be taken, since there is no way to predict how much the animal can tolerate without relapse.  The first recommendation, when feasible, is to allow the horse to graze naturally and avoid feeding hay.  Even hay bales from a reputable source – especially round bales – may prove to cause a relapse in an especially sensitive horse.  Rolled grains also have a high dust content.  Poorly cured hay may contain molds and bacteria that trigger diseases like RAO when inhaled, or botulism when ingested.

Feeding silage, a high-moisture fermented hay product, will reduce the dust exposure, but carries the risk of Clostridium botulinum contamination if not properly processed and stored.  Follow the recommendation of your veterinarian and consider vaccinating for botulism when weighing this option.

In cooler climates, many horse owners avoid keeping horses at pasture despite the fact that they do very well if provided protection from wind and precipitation.  Their well-being also depends upon available nutrition and unfrozen water supplies, of course.  Pelleted food is a good alternative to hay when pastures grasses are low or unavailable.

In the stable, there are options for bedding materials that may help control dust levels.  Shredded cardboard or paper bedding are proving useful in this effort.  Regular cleaning of manure and wastes, and frequent bedding changes will help to reduce molds from growing.  Better ventilation methods may also reduce dust when the stable is dry, as well as deter mold from growing in moist conditions between cleanings.

The most effective way to help prevent RAO from developing in a healthy animal is to allow the horse to graze at pasture as much as possible.  The pasture is a horse’s natural and best food source, and avoids many of the hazards that processed feeds and man-made shelters, despite the best intentions, may introduce accidentally.